Not an Emergency?Get an Estimate

Northstar Restoration Services is your source for residential and commercial restoration

Is Your Commercial Property Prepared?

How to Deal With Ice Dams This Winter 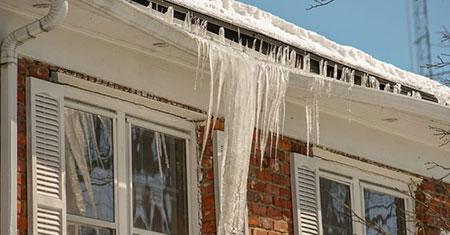 Cold temperatures can mean the possibility of ice dams on a roof. This winter weather problem can be one of the lesser known homeowner headaches for the season. As a responsible homeowner, it’s a good idea to be aware of the potential for this issue as well as ways to prevent its formation and deal with it once it’s too late.

What is an Ice Dam?

An ice dam is a ridge of ice that forms at the edge of a roof. This ridge prevents melted snow from draining off the roof, which can cause a backup of water behind the dam. Nonuniform surface roof temperatures create ice dams. This happens due to a variety of factors including heat loss from the interior of the home, snow covering on the roof, and external air temperatures. For a dam to form, there must be snow on the roof. Also, the upper portion of the roof must maintain an average temperature above 32 degrees with the lower portion maintaining an average temperature below 32 degrees. Outside air temperatures must also be below 32 degrees. The snow on the upper surface of the roof will melt, trickling down to the roof surface that is below freezing, at which point the melted snow will freeze, forming the dam. Most dams are created due to a heat source inside the house heating the upper portion of the roof, though, rarely, some are formed from solar heat.

Fortunately for homeowners, ice dams are preventable with the correct short- and long-term steps. To prevent the formation of ice dams, remove snow accumulation from the roof. Ice dams cannot form without melting snow, so keeping the snow load low is a very effective prevention tool. For a long-term, more permanent solution, make sure the ceilings in your home are airtight so that warm, moist air from inside the home can’t leak into the attic space. This air leakage will heat the upper portions of the roof, causing snow to melt. It’s also a good idea to consider increasing the ceiling and/or roof insulation to decrease heat loss due to conduction. It’s also important to note that home characteristics such as recessed lights, skylights, and heating ducts in the attic can all increase the risk of ice dam formation.

It’s extremely important to remove an ice dam as soon as it’s identified to prevent damage to the home. Calcium chloride, which is the same salt used for sidewalks and driveways, can also be used to melt ice dams. Sprinkling it on the dam won’t do the trick. The best way to melt a dam with calcium chloride is to fill several long socks or pantyhose with the salt and tie off the ends. Then, lay the socks vertically over the dam so a few inches are hanging over the edge of the roof. This will melt a channel into the ice dam allowing water behind it to flow through and off the roof. A note of caution, though; make sure to use calcium chloride not rock salt, as rock salt will damage the shingles on the roof.

It’s also possible to remove an ice dam by force, a much more dangerous method and that should be left to professionals. First, clear the roof of excess snow. Then, usually in conjunction with a melting procedure like the calcium chloride mentioned, break up the ice dam into small chunks using a mallet. Breaking up the ice dam should only be done from on top of the roof as large chunks of ice can fall to the ground, causing injury as well as property damage.

The last method of removing an ice dam is a professional-only method. A roofing professional will, once again, remove excess snow from the roof, then steam channels into the dam to allow for drainage. Remaining ice will then be chipped away until the roof is clear of ice.

Unresolved ice dams can cause damage to both the interior and exterior of the house. The ice buildup itself can cause damage to roofing materials, siding, and gutters. Ice dams can also cause extensive interior damage. The dam leads to a buildup of water on the roof because the snow continues to melt with nowhere to go. This water can infiltrate the house, damaging insulation, drywall, and other materials. Gone undetected, the water can also lead to mold growth. In all these instances, it’s important to seek professional help for mitigation.

Knowing what an ice dam is and what causes it is integral to preventing them. If an ice dam occurs, it’s very important to not only remove it quickly and safely but also to keep an eye out for potential damage both inside and outside of the home.

If you've suffered a storm or extensive water damage to your property you need to enlist the help of an expert to get your property back to their...

The emotional impact of a fire can be devastating. Let us make the cleanup process as stress free as possible. Turn to our team and...

We'll do everything possible to get your property back to normal just as quickly as possible. Our team has the experience to handle all kinds...

NorthStar Restoration has been a preferred hoarder and trauma cleaning provider for Central Wisconsin for over ten years...

One of the biggest post-flood dangers to the health of a property and its inhabitants is mold. A flood in a home or commercial property grants mold ideal conditions in which to thrive. Call us to return your...

We specialize in bringing carpet & upholstery, tile & grout back to life. No matter the size of your home or business, we can have them looking and smelling their best.

Once the fire is put out, the waters removed or the mold cleared away, your home is left with a need for some TLC. Trust our team to get your home back to its...